The Islamic Center in the American capital, Washington, D.C., located at 2551 Massachusetts Avenue, has been a site for two simultaneous congregational prayers since March 5, 1983. There is a Jumuah (Friday) prayer service that is held inside the mosque and another one outside the mosque at the same time every week for the past 24 years. This congregational division of Muslims also happens during the two major Islamic holidays (Eid al-Fitr and Eid al-Adha).

Many people ask: but why?

The Islamic Center (IC) in Washington, D.C. was established during the 1950's and registered as a trust. The reason for that, it is said, is to give the IC as close a description and legal status to a mosque as possible. Being that there is no such concept as waqf in American legality, a trust comes as close to waqf as is possible. From the 1950's until 1979 the administration of the IC was a function of the accredited embassies to Washington. And due to the political climate of those times, the Egyptian embassy was tasked with appointing the Imam to the IC. Other supportive positions were agreed upon by a committee of seven ambassadors who would rotate on a two year basis. During the 1950's and 1960's the number of Muslims in the Washington metropolitan area was scanty. But then during the 1970's the number of Muslims began to increase and multiply. And due to this demographic fact in addition to developments within the Islamic world (the Islamic Revolution in Iran, the Islamic Uprising in Syria, the Camp David Accords, the Soviet occupation of Afghanistan, the instability in Iraq, etc...) the Muslim community in Washington decided to elect the administration at the IC. The process of elections took almost two years of preparations and convincing. Finally, during the last Friday in the month of November 1981, the Muslim congregation in Washington held the first ever election at the IC after Friday prayers. And, as a result of that election, a new administration was now charged with the daily and occasional responsibilities of an Islamic Center/Mosque.

Following this election, the Saudi Arabian embassy began interfering in the internal affairs of the Islamic Center. It was due to this intervention by the Saudi Embassy that the Islamic Center would receive no more mail deliveries. Therefore, the IC had to obtain a Post Office address. The telephone number of the Islamic Center was also disconnected, and the IC had to obtain a new telephone number. But the elected administration was selfless in discharging its Islamic responsibilities and did so in the best Islamic tradition.

The elected administration (11 members) held regular shura meetings. They conducted Islamic classes in the masjid every week. They also welcomed other Muslims who sought Islamic study circle activities in the masjid. All in all, the IC had become a hub of activities that for the first time were generated by the peoples devotion and enthusiasm.

On the morning of Saturday March 5, 1983 just before salat al-fajr an assortment of law enforcement agencies and their functionaries forced the elected Imam, Mohammad al-Asi and his family out of the IC. The IC was locked and off limits to all Muslims. And the justification for that was (as announced by Saudi Embassy related personnel) that they had information that a cache of arms was in the IC; and in addition to that the IC had to be closed for a couple of weeks for repair work and renovations. The IC remained closed for over three months. 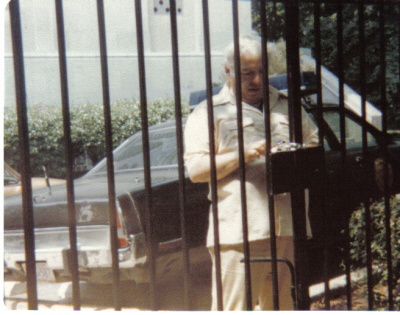 A SERIOUS BREACH OF FAITH

On Eid al-Fitr in July 1983  without prior notice  the doors of the IC were opened early in the morning and all Muslims began streaming into the IC for Eid prayers. During the time of the takbirat (leading to the salat) the Washington, DC metropolitan police entered the IC and arrested Imam Mohammad al-Asi and fifty other Muslims and took them to jail. They spent Eid in jail and were released the following day. They were charged with two counts of unlawful entry into the mosque and disturbing a religious service. These are misdemeanor charges which would normally be prosecuted in a week or so. But this trial of these fifty or so Muslims continued for four long months. Every day the defendants were required to show up in court. And at the end of this extended trial the judge dropped the charge of disturbing a religious service. But the jury after one full week of deliberations came out and said that the Muslims are guilty of unlawful entry into the mosque! The Muslims had to pay a fine and do community service. And since then there has been a security arrangement at the IC to prevent these Muslims from entering the Masjid.

The decision was appealed but was not overturned.  The appeal decision can be read here.

Since then, the outdoor Friday and Eid prayers continue every week and every year  rain or shine, in the dead heat of summer and on the ice of winter. 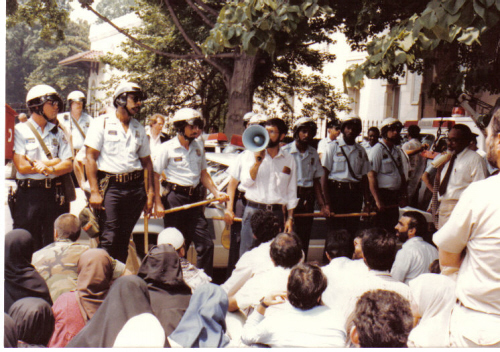 During the past twenty one years there have been attempts at reconciliation. Many Muslims who come to the Islamic Center in Washington, DC are frustrated and disappointed to see what is happening there every week. And some of them on different occasions tried to arbitrate this affair. And it would seem like a solution is near but it has always been the retort of the Saudi ambassador, Bandar ibn Abd al-Aziz, (who incidently or not took over from his predecessor Feisal al-Hejeilan during the IC crisis in or around 1982), to rebuff any rapprochement. Therefore, the whole affair remains in its current deadlock.

If there is to be an amicable winding-down of this travesty of justice the current Saudi imposed administration and its superiors in the Saudi Arabian Embassy in Washington, DC have to realize:

1- Muslims have a God-given right to enter the masjid (the Islamic Center, 2551 Massachuset Avenue) without any conditions or stipulations.

2- Muslims have the God-given right to speak and listen to other Muslims at that premise without any conditions or stipulations.

3- Muslims have a God-given right to work for bayat and shura (elections and discussion leading to decisions) without any conditions or stipulations.

All of the above, of course, shall be done according to the Quran and the Sunnah.

4- Alternatively, the Saudi Arabian government may want to consider providing the Muslims whom they have barred and banned from the IC with an equivalent or commensurate Center for the purposes thereof.

In the subsequent years (1985, 1986, 1987) the Saudi Arabian Consulate in Washington, DC refused to issue him a Hajj visa. Imam Muhammad al-Asi was finally told via the consular official who issued the first visa himself (Mr. Muhammad Abu al-Hamayel) that the Saudi Consulate in Washington, DC has instructions from the Interior Minister, prince Nayef ibn Abd al-Aziz, not to issue any visa of any sort (hajj, umrah, commercial, visit) to Mohammad al-Asi.

This has to stop. A Muslim should be able to go to hajj and umrah without these types of harassments and unnecessary obstructions from Saudi diplomats and officials.